By late winter 2016, it was clear that the Zika virus caused severe birth defects in newborn babies. Public health officials suspected it was only a matter of time before the Zika virus would arrive in the continental U.S. In anticipation of these outbreaks, the Centers for Disease Control and Prevention (CDC) needed to immediately amplify its messaging around Zika prevention, while developing and launching an education initiative to prevent the spread of Zika in high-risk areas and among high-risk audiences. On behalf of CDC, as a subcontractor to Abt Associates, Hager Sharp conducted a rapid-response earned and paid media effort to amplify existing messaging, while developing a new campaign for high-risk audiences and implementing the campaign through paid media in high-risk markets.

The campaign ultimately raised awareness of the importance of preventing Zika and educated audiences on the four preventive actions for Zika. Most importantly, it changed people’s behaviors: people who saw the Zika ads were more likely to take preventive action than those who did not.

We approached strategic planning for the Zika campaign along two parallel paths. First, because the outbreak was already underway outside of the continental U.S., we immediately needed to amplify existing CDC Zika-related content for CDC’s website, social media, and other channels. We developed 33 weekly plans for specific tactics to amplify CDC’s themed content through earned media, paid media, and partner engagement. These tactics were to be implemented in high-risk markets across the U.S. and targeted a range of audiences, including pregnant women, parents of older children, health care providers, community organizers, disaster preparedness workers, outdoor workers, students, and educators.

On a parallel path, we needed to plan for the overarching domestic readiness campaign that would be launched locally in the U.S. when the first case of local transmission was documented (e.g., Day One), including the development of a specific communications plan for Day One. In the early days of this contract, it was not clear when Day One would occur, and whether unique materials would need to be launched into market, before a more robust and strategic campaign would be available. Therefore, we developed an overarching strategic frame for all campaign related messaging and activities. Strategic planning activities included audience segmentation and message development, creative brief development, media outreach planning, partnership support and ongoing strategic recommendations. Simultaneously, we planned and prepared for Day One by conducting preliminary market and audience research, coordinating with potential media partners and vendors, and developing key components of the Day One Zika Communications Plan. Hager Sharp worked with CDC to develop a campaign that would prevent as many Zika-related pregnancy complications as possible in high-risk areas among high-risk audiences. To understand what was motivating and effective, we reviewed existing Zika materials in market (CDC’s and others’) and tested those messages and imagery using social media. We used the findings to develop a suite of initial campaign concepts.

Our final concept—“This is How, This is Why”—educated people on preventive actions and linked them to ensuring the health of our next generation. This concept was expanded into a suite of campaign materials that were deployed across diverse platforms, channels, and languages. 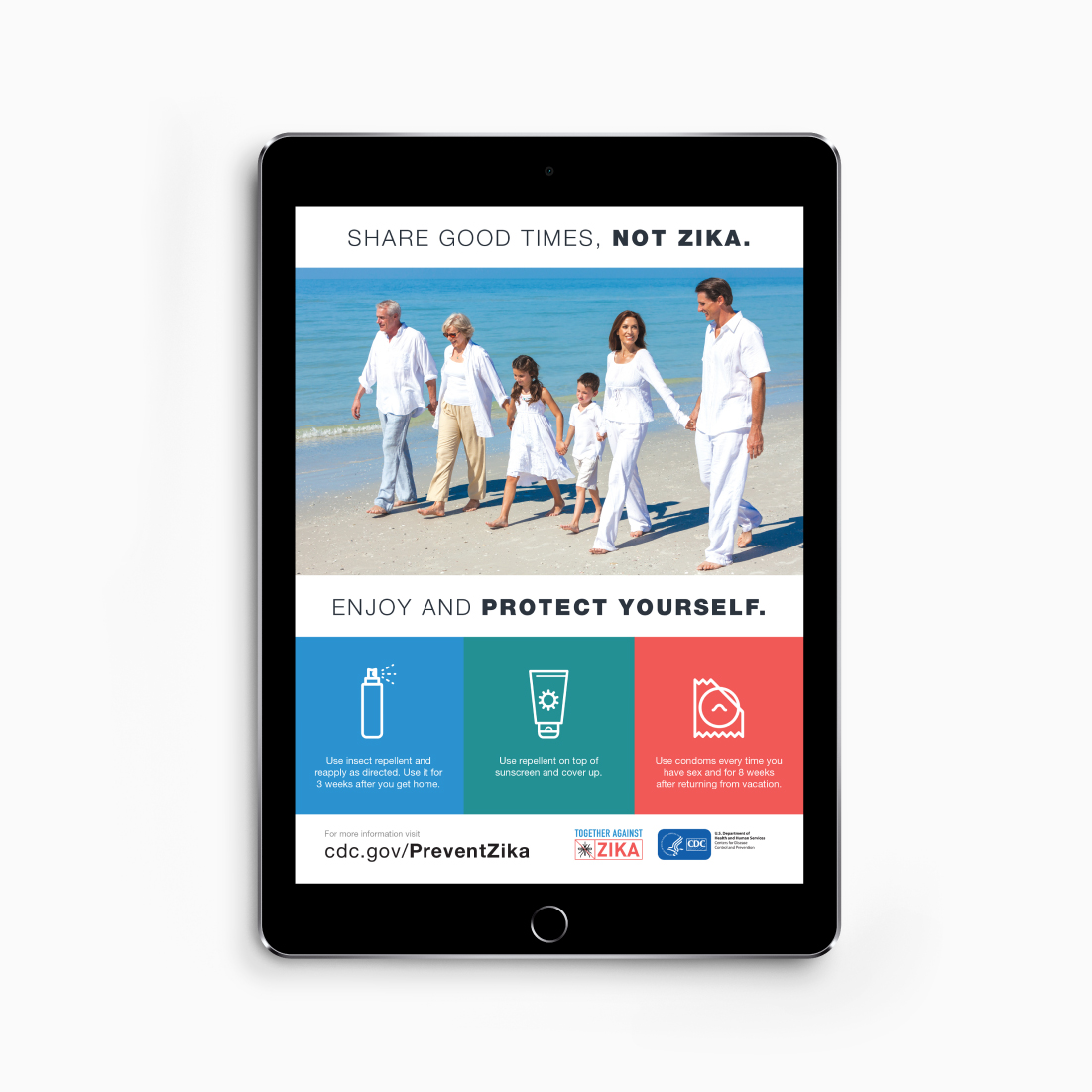 To effectively prevent the spread of Zika, the campaign needed to quickly increase the flow of information about Zika into high-risk areas and areas with active outbreaks. Hager Sharp purchased digital, radio, print, and out-of-home ads across multiple markets, targeting audiences most likely to be at risk. The buys were customized to each market and launched quickly to ensure that residents received the vital public health information. For digital ads, we analyzed performance to identify optimizations, such as identifying ad concepts to further refine via A/B testing, budget reallocations that provided cost efficiencies, and audience targeting refinements that improved effectiveness and expanded reach.

We also worked with CDC to support its ongoing efforts to distribute accurate messaging around Zika outside of high-risk areas, using paid media to boost social media content reach.

Because of our ongoing optimizations, ads had a very low average cost-per-click and high click-through rates. 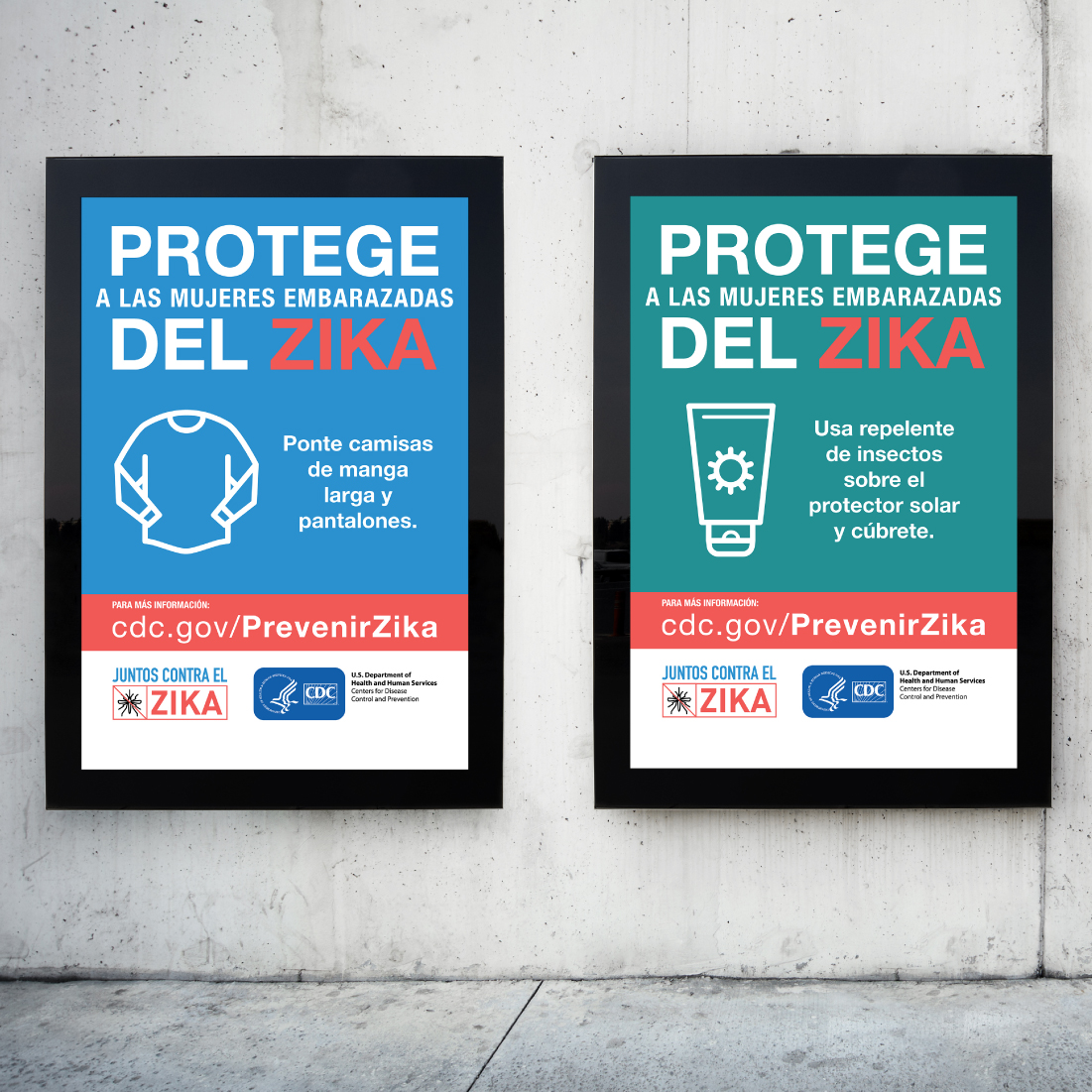 Hager Sharp worked with CDC to reach diverse audiences, which was particularly important in several markets that were highly multicultural and/or travel hubs to Central and South America. We identified media consumed by multicultural audiences and placed culturally adapted advertisements in multiple languages—Spanish, Portuguese, and Haitian Creole—to ensure messages reached audiences likely to be at risk.

The campaign reached audiences and motivated them to action, a result of research-informed, compelling advertisements, meaningful paid media results, and strong media buying negotiations. Throughout the campaign, we used research to inform our actions: We conducted exploratory research to guide initial concept development, which was then refined using audience testing. Once in market, we conducted ongoing analysis of paid media performance to further refine the creative, maximize the available budget, and better reach CDC’s target audiences. This research-informed approach led to CDC’s success in raising awareness of the importance of preventing Zika and educating audiences on prevention actions.

The efforts reached more than 26 million people through an estimated 450 million ad impressions.
Our media negotiations resulted in over $4 million in savings for CDC.