Growing Up Bilingual Made Me a Better Communicator

Inspired by a great job opportunity, my parents decided to leave friends and family and move me and my older brother from Venezuela to the USA. I was 5-years-old when we moved to Maryland. It was a tough choice, but the right decision. When we arrived in the US, my parents determined that if my brother and I spoke English at home and they responded to us in Spanish, we would learn English faster while not losing our native tongue. It was certainly an interesting approach—one that made people do a double take whenever my family spoke in public.

As a child, mastering the English language and assimilating to American culture was top priority for me. I was a Venezuelan first-grader in a mostly white school environment who was not ready to embrace my Hispanic heritage, nor my hard-to-pronounce name.  Add to that getting pulled out the classroom in front of all my young classmates to attend English for Speakers of Other Languages (ESOL) classes, I often felt like an outlier. I realize now that as trying as it was for me as a young ESOL student who just wanted to fit in, this experience helped me develop and value an important communication skill — understanding your audience.

In writing, knowing your audience shapes the way you deliver messages. Writing business proposals for potential clients typically requires the use of a formal, persuasive tone of voice. At the other end of the spectrum, texting your friends requires far less formality. In advertising, car commercials—which largely try to build credibility and reason —are catered to adults, while toy commercials—which use excitement—are aimed at children. Understanding your audience is vital in determining what content you will use; thus, researching your audience and understanding their desires will help you target your message.

Growing up bilingual has allowed me to be more empathetic toward various audiences. Knowing the feelings of frustration and fear when not being understood can grant you a new perspective on humanity. When I first arrived in the US, I had a difficult time connecting with my audience (my classmates) because I was not familiar with their culture. When I did my research (such as watching the same cartoons as my classmates), it was easier to connect with my audience.

Understanding who your audience is and what they like can be half the battle when creating better and more digestible messaging. I strongly believe that the more you open yourself to different languages and cultures, the better you will communicate–in any setting.

The New Face of the Nationals

I had the pleasure of attending a Washington Nationals game recently. I’ve been a fan since before they arrived in DC, as I had the good fortune to work with Washington, DC’s bid group in “luring” the Expos from Montreal. The team has come a long way since their days in RFK. And at the particular game I attended—my first of the 2018 season—I was happy to see a new face among all the Nationals. Not Soto in the outfield or Reynolds at the plate or Martinez in the dugout—although it has been great watching them play and manage—but Gotham, up on the scoreboard. Yes, Gotham… the National’s new typeface.

As of this season, Gotham replaces Trade Gothic—the scoreboard typeface since Nationals Park opened in 2008—on the scoreboard and in their marketing materials. According to an interview Nationals chief revenue and marketing officer Valerie Camillo gave to the Washington Post, the change was made because Gotham, “was modern, it was clean and very versatile.”

Gotham is a wise choice. It’s a typeface that’s engineered more than it is designed, stripped of any superfluous elements and created specifically for a hard-working, no-nonsense, modern image. A great reflection of the day-in, day-out of a 162-game season, the grit of the men who play the game, and the directness of the data behind today’s sabermetrics. 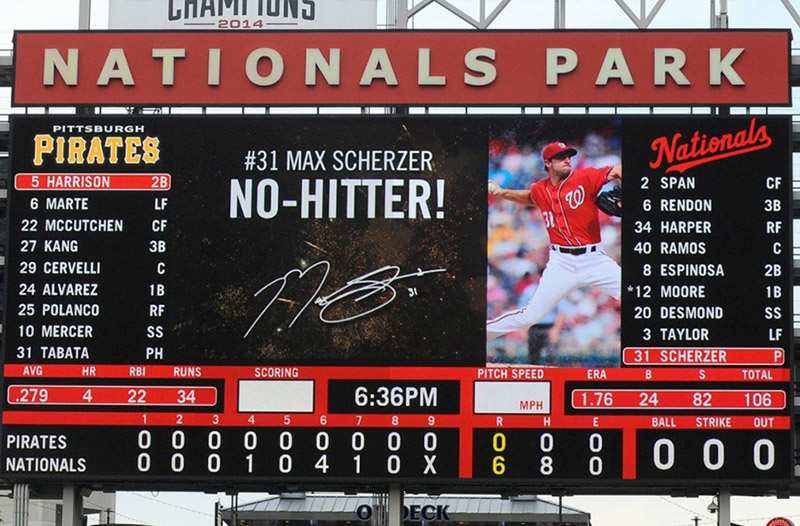 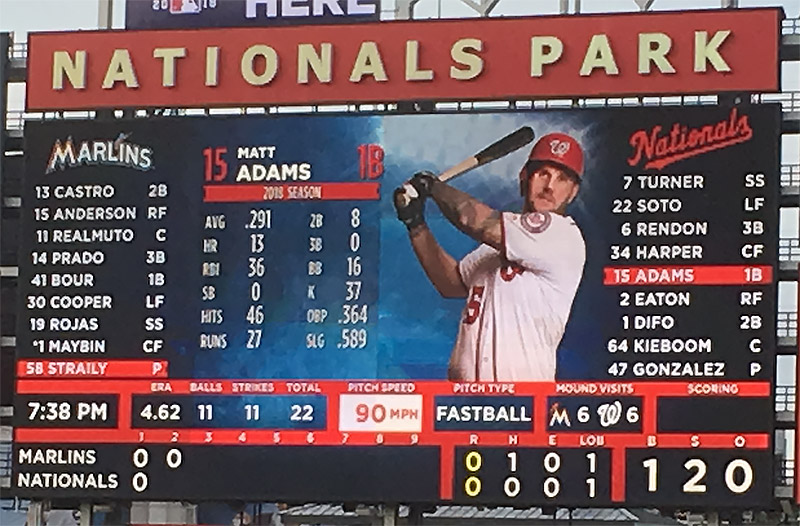 Gotham on the Nationals Park scoreboard in 2018.

Gotham can also be easier to read at a distance, thanks to its reasonably high x-height (the designation used for the height of lowercase letters) and wide apertures (the negative spaces or holes in some letters, like o or n). It is extremely flexible, includes a number of widths and weights, and, appropriately for a scoreboard, Gotham also features a complimentary numeric style range (numbers).

At Hager Sharp, we use Gotham as a typeface for a client with similar characteristics: the National Center for Education Statistics (NCES). The clarity and transparency that Gotham evokes is ideal for this data-driven institution, the Elias Sports Bureau of national education statistics. We use it in the signage for NCES’s conference booths, in short brochures with minimal text, and online.

Want to know more? The history of Gotham is quite interesting and can be found on the website of Hoefler & Co, the type foundry GQ magazine commissioned to create the typeface back in 2000.

The announcement sparked some debate. Is it a step forward in cancer care or cause for alarm? 23andMe believes that marketing these types of tests directly to consumers is “incredibly valuable for those who might not be aware of their Ashkenazi Jewish descent or aren’t familiar with their family history of cancer.” There’s certainly an argument to be made that open access to genetic information is a good thing—it can arm consumers with important information, help them take control of their health, and even save lives. But what if people misread, misinterpret, or do not understand the results?

The Ugly Side of Social Media Exposed

Does social media encourage the worst in human nature?

Having spent the last decade working in social media, I’ve seen a lot of bad behavior. From nasty Facebook comments to people berating each other in forums, I’ve brushed it off by telling myself that passionate people are more likely to express themselves online. Middle-of-the-road people don’t bother.

A recent study in Science has me questioning whether I’ve been too optimistic all these years. Over the last decade on Twitter, the study found that falsehoods in news were much more likely to spread than accurate news, and spread more quickly. Even more depressing, authors found that humans—not bots—were more likely to share the falsehoods.